Hello, friends, and welcome to another EarperView! We are so blessed as a fandom to have such a wonderful production company behind our little shit show, and Paige is the lovely human behind the Twitter account (amongst about a million other things). Each time I’ve had the pleasure of interacting with her, she’s been kind, funny, smart, and just super awesome.

Accounts like this make it easy to love our show, you know? But there’s more to her than just the Twitter handle, so I was lucky enough to get her to agree to do an EarperView. Sit back, grab some sexy pink fog and a cigarillo, and let’s all learn some more about Paige, shall we?

Well, at work, my non-Earper alter ego actually works mostly in Development, which means I work a lot on shows that haven’t been greenlit and may never be greenlit. It’s really, really fun working with creative writers and reading their material, and my colleague Jessalyn Dennis is an amazing person to work with. She’s super intelligent and really intuitive and creative. I love working in Development with her. I studied cinema studies and playwriting in University, so reading work in Development and even production drafts of scripts (once I watched Wynonna 207 and followed along with the final production draft of the script — it was so cool!) is always an awesome learning opportunity for me! When a show like Wynonna Earp or Heartland  is in production, I mostly prepare/execute contracts and work on lots of stuff related to music licenses. I’m also in charge of submitting all the shows for various awards throughout the year, so that really keeps me busy. I take it really seriously, because I know firsthand how hard all the artists on all of our shows work. They deserve a ton of recognition. At work I also chug tea like it’s my job, and I drink three-four litres of water a day because Alberta is arid as HECK.

Outside of work, I’m an obnoxious cinephile on a one-woman mission to tell the world that Jennifer’s Body is a masterpiece of feminist allegory and deserves a cult following. If I’m not at the movies or bingeing a TV show, I’m cross-stitching a ton, maybe hitting up hot yoga, and using the public library (the Calgary Public Library has like, every movie in the Criterion Collection! Can you believe!?) and eating brunch. I’m a pretty big fan of figure skating and follow it very closely, but that’s about as into sports as I get. As I’m sure you can tell from the S24 Twitter, I am a big fan of emo/pop punk music and may or may not have a Fall Out Boy tattoo.

I started at Seven24 almost exactly two years ago (at the time I’m writing this) and they were like, “Yeah, the fans are really into it. Can you run our social-media accounts?” I logged on to Twitter and was just…shocked. This show had only been on for one season and it had a podcast!? After that, everything just snowballed. I really wanted in on the action, because it looked like so much fun, and I didn’t think there was any reason the production company Twitter account shouldn’t be as passionate about the show as the fans are, so I just jumped in. Lucky for me, Earpers are rad as heck and are willing to interact with the S24 account!

It’s not, but I’m reticent to say much more about fandoms I’ve been involved in, for fear of my old (terrible) fanfiction being discovered. [ Editor’s note — tell us more, Paige. Tell. Us. More. ]

What if your favourite fandom memory?

Oh, man, it’s so hard to pick just one! I’d have to say when Kevin, Bonnie, and Bridget went to visit the Wynonna set, it was pretty fun to see it all unfold online. I loved listening to that podcast episode. I also love seeing how much you guys support each other, it honestly brightens my day so much. Whether you’re raising money or using #EarperSupport, it’s just a constant reminder to me that there is good in the world and it means so much to me on a personal level. The S24 account is like a refuge of positivity for me. Even when fans are critiquing the show, it’s always thoughtful and passionate. That’s all you can really ask for.

ALSO I love sending Earpers presents, and I love seeing your reactions when you receive them. I have an Earper Treats master spreadsheet. It is VERY important to me. I get reined in a lot because I would blow the entire budget of the show on postal fees.

What is your favourite con memory?

Oh, my god, Docstache meeting Tim at San Diego Comic Con. Hands down. And the “SEASON FOUR” chants this year were pretty breathtaking, and so was Kayse’s truck cosplay!! Honestly, whenever the Earpers can meet Emily and the cast, it really makes me so happy. I know how good it feels to meet people you admire and I’m just always thrilled to see everyone’s pictures.

And it wasn’t technically a con, but attending the Wynonna panel at the Calgary International Film Festival was amazing. I couldn’t believe how many people travelled to see the panel!! And I got to meet a couple Earpers, which was amazing!

Hmmm, besides tweeting? I love it when Earpers do fanart, whether it’s stitched or digitally painted or sketched.  I love seeing how creative and thoughtful you guys are! Honestly, if I wouldn’t get in trouble for using up all our printer ink, I’d just plaster my walls in that fanart. #Earptober was unreal!!

Wynonna Earp means an insane amount to me. First of all, I’m always ridiculously proud to be involved, even tangentially, with a show that has a female showrunner (the fact that BOTH Heartland and Wynonna have female showrunners is huge). It’s a privilege to watch this show unfold behind the scenes. I said it earlier but I learn so much from the amazing artists working on the show. I’ve always loved movies and TV but this has given me…such a deep appreciation for what it takes to get something onscreen. And when it hits the screen and Earpers connect with the material, it’s just magical. When we finally revealed Melanie’s pregnancy, I spent like…a whole day crying at my desk, in awe of the response, and in awe of the amazing crew that put the show together. That picture of her holding Peacemaker, leaning against the bar, looking so pregnant and amazing was my desktop background for like six months. I still get chills thinking about that day.

Like, yeah, Wynonna Earp is a big part of my job, but the community really sustains me on a personal level. It’s impossible to state how much it means to me. Honestly, I wish I could hug every Earper and pay off all your student loans. 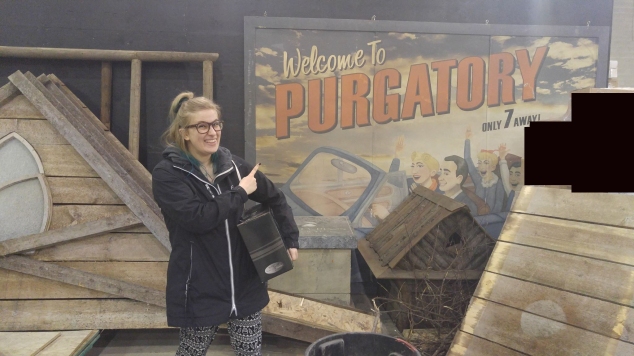 One is of me on my only set visit to Wynonna (at the end of S2 because the set was empty and I’m WAY too shy to talk to any of the cast/crew/writers) checking out the iconic Purgatory sign (sorry, I had to redact a bit of stuff). And you’ll notice I have a big box under my arm – it’s a wine holder shaped like a dragon motorcycle I got because we weren’t using it on the show. It is very ugly and very good and proudly resides in my apartment. I named him Bobo Del Rey. 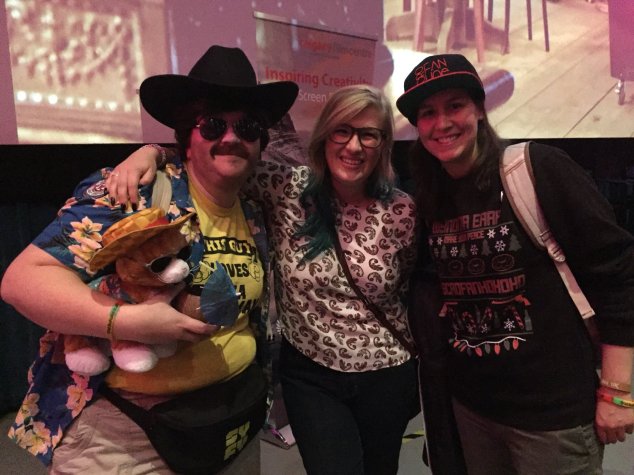 One is also of me, Cat and B. Dailey from the CIFF event!! Look at that big smile!! I make it daily reading Earper tweets!

I also wanted to include a picture of my Earper Hall of Fame cork board and some of my desk (Sorry, I did have to redact some stuff). Every time you guys send something to the office I put it up in my office so passersby can find out all about what you guys are up to! Everyone at S24 just adores the Earpers and I love sharing your exploits with my coworkers.

Hands down, sweet potato (which is different from a yam but is the same as a yam honestly). Number one, because they are packed full of vitamin A. Number two, they taste like candy. Sometimes for dinner I bake a sweet potato and then crack an egg in it and it’s like a fried egg sweet potato breakfast cup. It’s really, really good. Also yams are huge, one of them feeds me for like three meals!!!!

Sorry, the scale is broken because I Fandras that much. Emily is so cool I always break into a cold sweat when I talk to her, which I hope she never notices but I’m sure she does. Also, she introduced me to Tim and was super nice and stood there while I like, STAMMERED about Tommy from Instant Star. She is a hero.

Describe why Fandras is a thing in 7 words or less

(I’ll take more than seven) Emily is an amazing leader on Wynonna. Besides being such a talented and creative writer, she remembers everyone’s name, and notices everyone’s haircut. Small stuff like that means a lot (especially to someone like me, who is always trying very hard not to be noticed!!), I have so much respect for her.

God, so many. But probably that shot from 212 where they’re just lying in a field holding each other and it’s framed so gorgeously. That kind of intimate physical contact just embodies to me what it means to have a sibling you love so much.

I literally talk about Earpers like they are my children. I meet with my friends and give them updates about all of you, using your first names. I show everyone pictures of Chance EVERY SECOND I GET. I have beautiful prints from Nathalie and Taylor hanging at home, I have a pin from Jordan on my jean jacket (also a Wynonna set castoff), Meg stitched a tiny Gerard Way for me and it’s hanging in my craft corner. I’ve Earped my life so much I think it’s impossible to un-Earp it at this point.

If the WE cast and crew were zoo animals, what would they be and why?

Oh man, I mean…I think on some level every single one of them is a very sexy jungle cat. Every cast member, every crew member. They’re ALL very good looking, and sleek and cool. They are all jungle cats. And like, cats of the Savannah. And some of them are those wild cats that look like house cats. Except me, I’m a Quokka. Just happy to be here, and also slightly terrified of all these jungle cats.

Thank you SO MUCH, Paige, for playing along. I hope that we get to meet someday, because I think one of the tacos my wife has crocheted would look great in your Hall of Fame.