Chris’ mom works for a company based out of DC, and their summer event was a Nationals game…against the Pirates. So three of her kids and two of their significant others made our way to DC for the weekend (from Pittsburgh and Raleigh).

Chris and I left Friday night around 9:00pm in order to have more family time and avoid the daylight traffic. We had decent weather the whole way, and that meant we got to have some Saturday-morning shenanigans before the game.

So, I’m terrified of heights, as you might remember from my unsuccessful foray into zip-lining. But…I agreed to go on this. 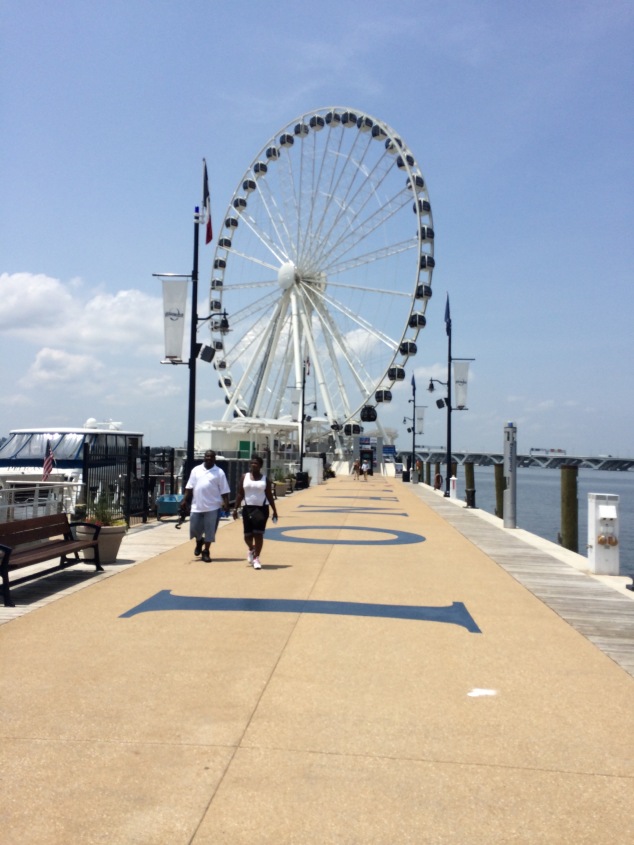 I don’t know who this couple is, but surprise — you’re on a blog!

We bought tickets and then ate lunch. We headed back to the wheel, and I took my life in my hands.

I sure hope somebody competent has control of this wheel.

I had the fear sweats for the first few minutes, but when I calmed down, it was a good time. The views were really nice, and we are all pretty funny.

During the fear sweats.

You couldn’t see as much of DC as we were hoping, but it was still a nice time.

Luckily, there was an easy way not to disengage your pod from the wheel and plummet to the water.

Then we headed over to the ballfield for the Pirates game. Karen’s company provided a suite, and, man, was it fancy. The food was great, and the bartender was awesome. When I asked for “lemonade and beer,” she asked if we’d been to Europe, and we talked about radlers for a bit. It was so hot out, a shandy was the perfect drink.

The park was okay, but it’s no PNC. We yinzers are spoiled n’at.

We ended up losing the game, but the opposing pitcher, Max Scherzer, threw an almost-perfect game, which was cool to see. He was one hit-by-pitch away from a perfect game and had to settle for a no-hitter. I guess he’ll be okay.

We took up a whole row, and not even all of the immediate family came.

After the game was over, a storm descended on the DC metro area.

Sure hope this isn’t about that Supreme Court thing…

Chris was a trouper and drove back in a torrential downpour. Other than that bit of rain, it was a really great weekend. Hopefully we’ll have some more shenanigans before we leave tomorrow.

One of my favorite parts of the weekend was realizing who else was here. It turns out my friends Sarah and Jenny (and their families) were here for the weekend, too. Also, my friend Kristin (who made our awesome save-the-dates and is pretty much a design ninja) was supposed to come to the Pirate game. Sadly, strep throat kept her in Richmond, so she didn’t get to experience my “Ashley Judd in ‘A Time to Kill'” sweating firsthand. And I didn’t get to embarass her in front of her boyfriend!

I guess there’s always next time.