Hello, everyone, and welcome to the last in the week’s series of podcast-themed EarperViews. We wrap up the week with @WynonnaFans, AKA Bonnie. END_OF_DOCUMENT_TOKEN_TO_BE_REPLACED

Continuing with our podcast theme for this week’s EarperViews, who else is a perfect fit but this guy, am I right?

Friends, I was so excited when Kevin agreed to do an EarperView. With starting up Buffy Earpers, I thought this was the perfect time for all of us to get to know more about our favorite podcaster. END_OF_DOCUMENT_TOKEN_TO_BE_REPLACED

Hello, and welcome back to another set of EarperViews! It’s great to be back, and I hope you enjoy the lovely people who’ve kindly agreed to participate.

I’m trying something different this go-round and attempting to do theme weeks. This week’s theme? Podcasters. And, no, it isn’t just me reposting mine, BP’s, and Michelle’s. I promise.

END_OF_DOCUMENT_TOKEN_TO_BE_REPLACED

Here’s the thing about day 1 of Amsterdam. A lot of it was spent sleeping, on a plane, or in the airport. END_OF_DOCUMENT_TOKEN_TO_BE_REPLACED

Our last day! We had a bit of a lie-in because of our long day yesterday. First we headed to the Phallological Museum and got some souvenirs. Like queer ladies do. Then we went to Hallgrímskirkja church and looked around a bit. I always love seeing churches in different countries. We climbed to the top of the tower for a spectacular view.

We walked through a park and saw some geese, ducks, and a rainbow!

We grabbed hot dogs again for lunch, and it started to rain…and then hail. Did I mention it’s from an outdoor stand? Still, totally worth it.

We wanted a break from the rain, so we went and had a coffee and a dessert. And a nice view.

We spent the rest of our day shopping, and Chris found a yarn store. She got supplies to make a hat and a scarf, plus this surprise cool reusable bag. The symbol on the bag is for the Hand Knitting Association of Iceland.

We had dinner at a place that touted its raclette and fondue, and I was STOKED. We had had raclette before, on our vacation to Germany and Austria, but had never had it in a restaurant. I’m not sure if our experience was…normal or not.

We ordered our food, and then we were moved to a different table so the raclette machine could be set up. It heated up, and about 10-15 minutes later, the waitress brought a plate of cheese, four spatula trays, a bowl of potatoes, and two plates of meat and vegetables. And left.

And little did we know, we wouldn’t see her again until we were done.

So, as you can see, we figured out what to do, but we had no clue. I panicked.

So I googled “order raclette in a restaurant,” and I learned we broil the cheese below and grill the other stuff above. We think the machine may have been defective, though, because the cheese didn’t get super hot and bubbly like usual. But maybe that’s an effect of the machine instead of an open flame.

Remember our waitress? Us too, barely. Over an hour passed. Nothing. No water. No asking if we are okay. No “any questions?” 1:12 from “I don’t know how to eat this” message to her asking “was it all right?” “Mm-hmm” was my answer, barely conscious as I slowly faded away from dehydration.

Oh, and the menu said it came with cornichons, and THERE WERE NONE. Also, no bread also promised on the menu.

And the bill came, and despite it not being clear on the menu the price listed was per person, we were charged double the price on the menu. I wouldn’t even care about that — because it wasn’t surprising — if it weren’t paired with the other stuff.

The food was good. I just have no idea if we prepared/ate/etc. it correctly. But I guess it doesn’t matter?

Now we are all packed and my alarm is set to wake up in…2.5 hours. Damn. Guess I should go to bed.

How has it been three days?!

Today we put our rental car to the test and went from Reykjavík to Jökulsárlón glacier lagoon — a 5-hour trip one way.I hardly slept last night so, to no one’s surprise, I was a little grumpy. But Chris took the wheel after an hour, and I got a nap. And then some lunch. And then my mood improved. Oh, Monica. How does she put up with you?

Our first stop was Reynisfjara, which also happened to be the wallpaper in Chris’ computer for two years. Bucket list item for her.

Next we stopped at a crazy diner/gas station/mini mart that I dubbed Icelandic Sheetz. We had delicious lamb soup and a lamb burger.

Our last stop was Jökulsárlón, a lake that had bits of glacier bobbing in it. It was one of the most beautiful things I’ve ever seen. 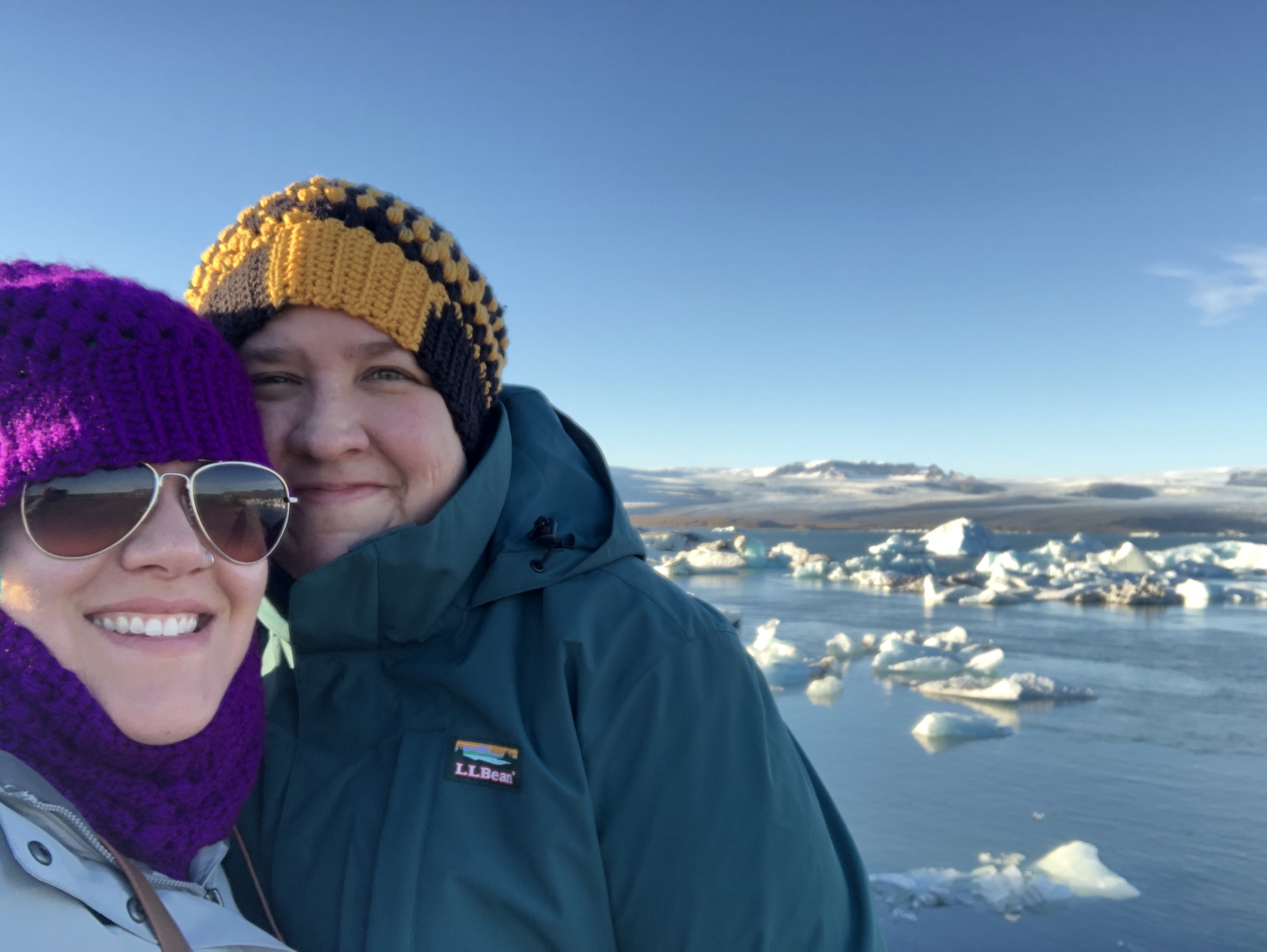 One of the best parts of the day was the scenery along the way, so here’s some of that. 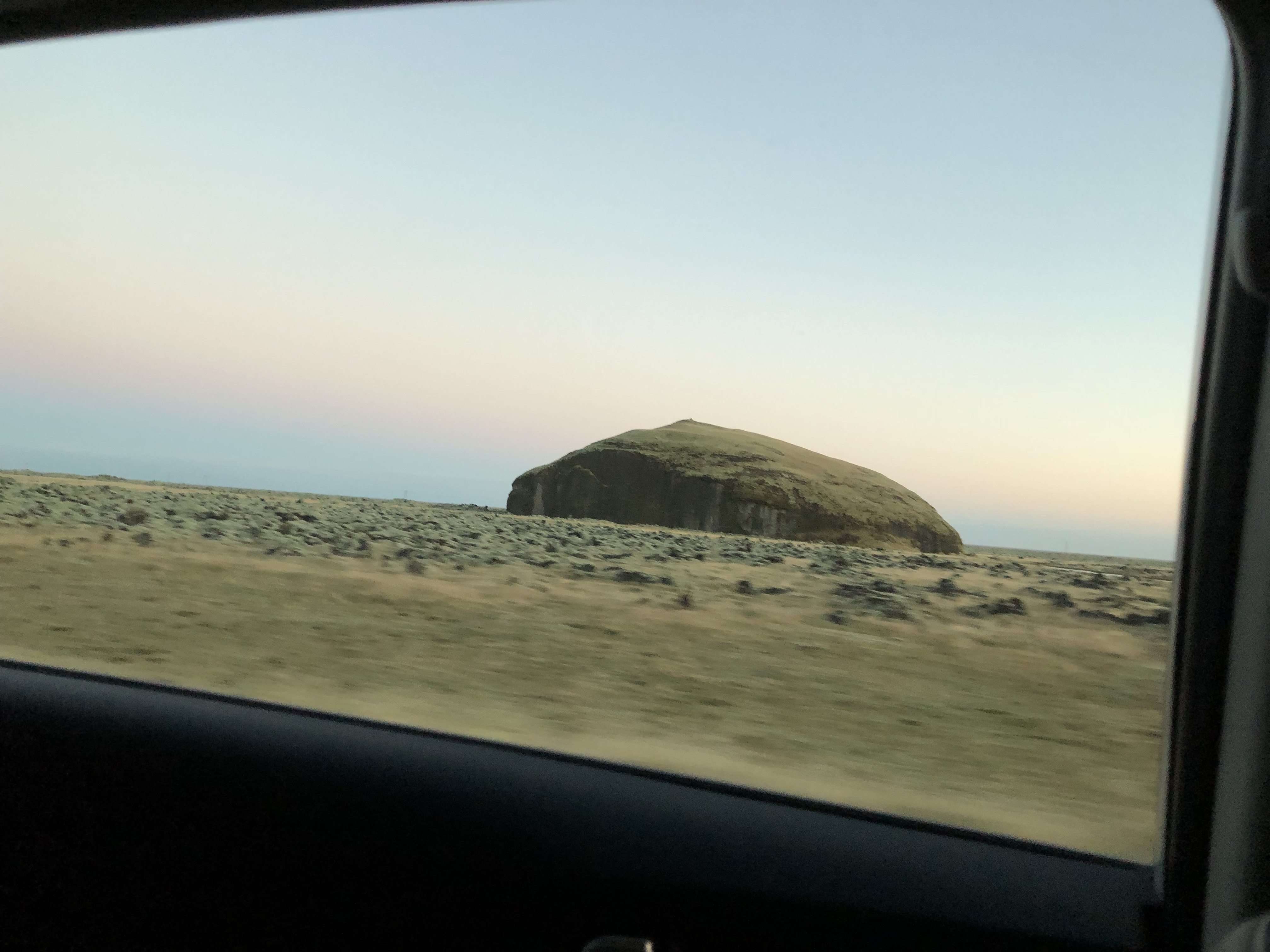 Also, our first task of the day? Getting gas. It’s 6am and 3 degrees Celsius outside. I pay with my credit card, and it asks for a pin.

But…I have no pin.

It’s freezing, I’m exhausted, and we are in Iceland. I shrug and enter the pin to my debit card, thinking if I ever set one up, that was probably it.

Oh, and I thought I locked us in a bathroom for 20 seconds before Chris saved the day.

Tomorrow’s our last day here! So much lamb soup, so little time.