Hello, everyone, and welcome to the last in the week’s series of podcast-themed EarperViews. We wrap up the week with @WynonnaFans, AKA Bonnie.

For those of you who don’t know, Bonnie was a huge part of the fan push for season 2. She led the Earpers who came up with amazing #NoChill ideas — contacting and tweeting at Syfy, Twitter power hours, theme weeks, RTing the most creative and funniest tweets from all of the Earpers — the list goes on and on.

Bonnie has always said from the beginning that all Earpers are always welcome, and I think that’s the difference between our fandom and others. No matter who you are, where you are, how you are, or what you do, if you like Wynonna Earp, you are part of the shit show.

Tell us a little about your Non-Earper alter ego.

I always wanted to have a lot of children, and now I am a mom to 5 amazing kids — and, no, that’s not too many. For me, it’s just right! I am originally from New Orleans, but since I turned 18, I have lived in Alabama, California, and Missouri! I used to be a Neonatal Intensive Care Unit nurse until I got pregnant with my fourth child. Then I decided to stay home to raise my kids and reinvent myself. I started freelance writing and now I run a successful writing business from home! When I’m not writing, momming, or Earping, I write songs, play piano and guitar, and go to kickboxing!

In a lot of ways, it felt like “if you build it….they will come.” I started the Wynonna Fans Twitter account before I had even seen a single episode. I had seen an Emily Andras tweet in the summer of 2015, and I got very interested. I kept watching as they filmed season one, and by the time March 2016 rolled around, I was ready to fall in love with TV again. Something inside of me just KNEW that Wynonna Earp was going to be great. I put my faith in Emily…and she did not disappoint. Just the opposite. This show completely changed my life. I can’t even begin to tell you guys how much. So, I guess you could say I got on the bus very early on — before it even left the station. Hahaha.

For the most part, yes. I found the Lost Girl fandom right as the series was ending. So, yes, this is my first real fandom going this far down the rabbit hole.

For me, my favorite fandom memory was, in fact, the three weeks of “No Chill” we did prior to getting a season two. I was so afraid that we weren’t going to get renewed and that this whole amazing, beautiful ride was going to come to an end. So we embarked on a pretty remarkable three weeks of No Chill, and it was amazing. To see everyone get involved and send Syfy their letters and their serenades, and tweet their hearts out was so inspiring. We did a Power Hour one day during the No Chill weeks, and Earpers sent over 24,000 tweets that hour. I had chills and goosebumps because I realized at that moment just how special this fandom really was. We were a force to be reckoned with…and we moved mountains.

Hearing those words from Melanie at SDCC that she ate a burrito…and that we “GOT A SEASON TWO” was incredible. To know that all of our hard work paid off and to hear the cast say that they heard us and that we made a difference. I will never forget that moment. In life, it’s easy to walk around feeling invisible — feeling unheard by everyone. And in that moment, to know that our voices were heard and that our voices MATTERED…was an empowering moment that I will never forget.

What is your favorite Wynonna Earp activity?

I love all things Earp, but I absolutely love the Whiskey and Doughnuts hangouts. I love getting to talk about the latest episode with cast members and other Earpers. Seeing various Earpers come on the hangout is a blast, and I love all the endless theories. Whenever the hangouts are done, my face hurts from smiling and laughing so much.

Light. This last few years have been rough for the world, our country, and humanity in general. Wynonna Earp represents the light in all of that darkness. It is a constant reminder that there is goodness in the world. I see it every day in this fandom. 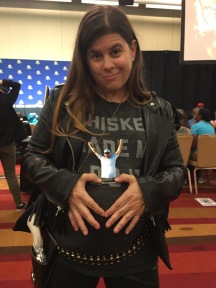 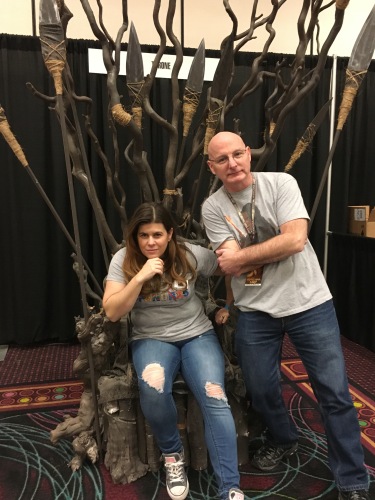 Widow Beth — I always love the ones you don’t see coming. We overlooked her quite a bit in the beginning of the season, and in the end she was a force to be reckoned with.

What’s a Fandras? Just kidding 😉 Don’t we all Fandras at least a 10? I think that I Fandras just the right amount. I respect the hell out of Emily Andras as a writer, a creator, and as a person. She fights for the things I believe in fighting for and she does so with humor, grace, and kickass bootcut jeans. I will always be on whatever bus she is driving — happy to be along for the ride, passing out snacks, and playing Prince music at full blast.

‘Cause she’s bringing sexy back.

“No, Wynonna…you’re the best of us.” That moment broke me…especially as Wynonna was giving up her baby at that moment.

I’m Wynonna Fans…hahaha. Wynonna Earp IS my life. No but seriously, I wear a Fangirl t-shirt that says Wynonna Earp on it at least four out of seven days a week! So my life is pretty good and Earped. Also, most of my kids know the “Tell that Devil” theme song!

Probably cosplaying as pregnant Wynonna at Dragon Con in front of Melanie Scrofano. It was a hot Atlanta day, and I cosplayed in pregnant leather gear. So I’m pretty sure that may have been the Earpiest thing I’ve done.

What is Gus’ truck’s backstory?

Maybe I will get around to writing this fanfic one day (hahahaha) but in my mind, the truck was Mama Earp’s truck and it is very good at getting Earps out of trouble. Originally, however, Mama got the truck from Juan Carlo. He posed as a mechanic (like he does) and told her someone had donated the truck. So Mama took it and fixed it up in the barn. But the truck wasn’t an ordinary truck.  I think that the truck is sentient. Think Kit in Knight Rider. It was the truck that drove Wynonna home from the hospital when she was born and the truck that helped find Waverly. Together with Peacemaker, it makes the ultimate Earp weapon. We’ve only scratched the surface of the truck’s greatness.

Thanks so much for playing along, Bonnie! I’ll see you all next week for another set of EarperViews.