Hello, Earpers, and welcome to a new week of EarperViews! This week’s theme? Earp-a-palooza. That’s right — we’ll get to know the three people behind next year’s Earper convention in Minneapolis.

When I first messaged the three founders, Allison was the first to respond, and I’ve had a little more interaction with her since. I was pleased to see she’s a fellow Supergirl and Carmilla fan, so I’m pretty sure we’d get along in real life. I mean, maybe we’d just scream at each other about TV for a few hours, but quite honestly, those are some of my favorite interactions these days.

I work as a video-content specialist for a video-marketing agency. I mostly spend my time in post-production editing all the content. We do things such as commercials, company training videos, product overviews, product demonstration videos, etc. I live in the southeast, and was raised with every bit of southern grit you could possibly imagine. I also have an almost 2-year old nephew who lives with me, and he’s every bit of my heart.

Unfortunately, I was a little late to finding it. I saw a lot about the show online while it was on hiatus from season one, so I did some research and got interested. Luckily it was right around the time it came on Netflix, so I binged the entire season in just a matter of days. After watching the show, I got online and basically found the fandom. It’s been all great from there.

I was pretty actively involved in the Grey’s Anatomy fandom for years, so it’s not my first fandom, but I will say it’s my first time being involved this deeply in a fandom.

My favorite fandom memory has to be the No Chill experiences I’ve been a part of on Twitter. I’ve never seen that many people rally around a cause and just go all out, no chill. It’s pretty great.

So, I went to Dragon Con this past year, and I didn’t decide I was going until Friday morning. I was on Twitter talking to another Earper who lived near me and we were going back and forth about how we wish we would’ve planned to go, and how it would be cool. Then, suddenly, I was booking a hotel room and planning to drive down to Atlanta the next morning. It was very spur of the moment, but the coolest thing was having another Earper who was willing to do the same exact thing. So, we both made the last minute decision to meet in ATL the next day. And the con itself was wonderful, of course.

I feel like the live tweeting is probably my favorite thing. I love being able to feel like I’m watching the show every Friday night with a whole bunch of virtual Twitter friends.

I think I’ve come to understand a little more about what it means to have people in your corner who you didn’t necessarily know you’d have. Like, I have so many more friends that I’ve met through the fandom than I ever thought possible and it’s all because of the show. So it’s helped me find my people, my friends.

Sure, this is a photo from Dragon Con with Tim. 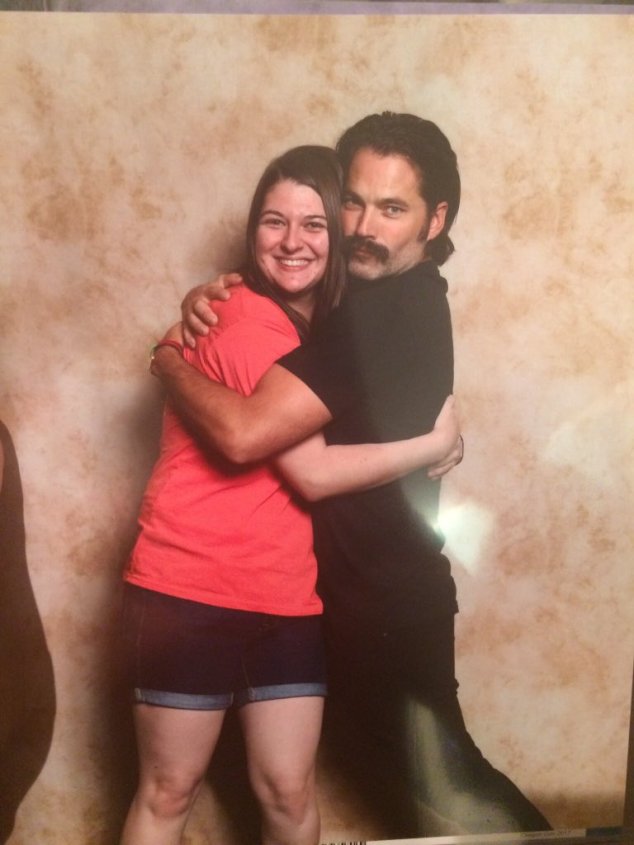 Hmm, probably Widow Beth because I feel like she was underestimated until the very end and I relate to that. Haha.

Because Emily Andras is queen.

Oh! So many! In Episode 2×01, one moment that stands out is when they were all being confronted by Black Badge and then Lucado aims a gun at them and says Wynonna can watch them all die first, and Wynonna’s first instinct is to jump in front of Waverly to protect her. I love that. It just shows how easy it is for her to protect Waverly and how in all situations, that’s her ultimate goal.

Well, besides throwing it in EVERY single conversation I have with people… At my job, my co-workers and I eat lunch together every day and we’ve been going through different TV shows. So, we’ll pick something to watch each day. And I finally convinced them to let us watch Wynonna Earp. We’re currently on episode 1×03, and I have no intention of stopping.

I think getting my boss and co-workers to watch Wynonna Earp during work hours is a pretty big accomplishment of mine. Haha.

Purgatory hosts its first ever fan convention. What sort of organization would book its convention in Purgatory, and how do our Purgatorian Scooby gang deal with it?

I think the organization would be something like “Paranormal Fanatics” or some business who has a huge interest in demon activity. And Waverly would be the first one in line for the convention, and Wynonna would probably have to tag along against her will.

Where you can find Allison:

Thank you so much for playing along, Allison! And if you haven’t already, friends, go check out Earp-a-palooza’s website to get more info on their upcoming con. Tickets are on sale, and the first guests were announced last week.