Continuing with our podcast theme for this week’s EarperViews, who else is a perfect fit but this guy, am I right?

Friends, I was so excited when Kevin agreed to do an EarperView. With starting up Buffy Earpers, I thought this was the perfect time for all of us to get to know more about our favorite podcaster.

I met Kevin for the first time at ClexaCon, though I had heard his voice long before. Even before Tales of the Black Badge, he used to call in to Drinks at the Dal, my go-to Lost Girl podcast. I had the pleasure of having a long, long discussion at ClexaCon about Buffy with him and Heidi. We basically tried to convince her to watch it, and though I don’t think we were successful, it was still a great convo.

Since then, I have launched into my own podcast venture with my partners in crime, BP and Michelle, and let me tell you — Kevin has been invaluable to us. First of all, he is always super supportive of our podcast and always has the attitude of “the more, the merrier” with regards to Wynonna Earp podcasts, which is very refreshing. We have all reached out to him with questions, and he has been so wonderful and giving with his time and his answers. TSiTH would not be what it has turned into without Kevin, and for that, we are extremely grateful.

The Wynonna Earp fandom would not be the same without Kevin, and I count myself lucky to have met him.

In my daily life, I do computer network support.  I have an amazing wife who is my soulmate, two grown daughters, and a granddaughter.

After seeing screeners of the first two episodes of the show about two weeks before it premiered, I thought it might be a fun show to do a podcast for since I enjoy interacting with fellow passionate TV fans. I had a feeling that this show had a chance to be something very special.

Through my podcasting and my annual visits to Dragon Con, I’ve taken part (to some degree) in several other fandoms over the years.

So, so many to choose from. I’ve been very blessed. I’ll go with being able to personally arrange and then take part in the cast’s and fans’ live-tweet event at San Diego Comic Con 2017. We had almost the entire cast, along with Emily and about 15 Earpers together in a private room to watch and live tweet the season 2 episode “Everybody
Knows” — The one with the “16 Words That Broke Us All”:

Wynonna: Here’s to single motherhood.
Waverly: You’re a superhero.
Wynonna: Same damn thing.
Waverly: This baby, what is it?
Wynonna: Ours.

Getting to experience that very emotional episode with several Earpers and the cast and being able to tell them all how much it meant to me in person as it happened is a memory that I’ll cherish forever.

As I mentioned above, I’ve been so blessed, there are many to choose from. Being able to moderate one of the Wynonna Earp cast panels at Dragon Con 2017 in front of 2,000+ Earpers was very special, but I think I’ll go with my first Wynonna Earp con experience. At San Diego Comic Con 2016, Bonnie and I, thanks to the awesome folks at IDW, got to go backstage with the cast before their first SDCC panel, where they got to announce the season 2 renewal. Being backstage with just the cast and being able to see and feel their excitement firsthand was amazing. I get chills just thinking about it again.

Getting to do Wynonna Earp fan panels at conventions (Dragon Con, ClexaCon) with a live audience of Earpers is a major rush. Doing the podcasts is a lot of fun, but getting to see Earpers react live can’t be beat!

Family.  The kind that you get to choose and the kind that inspires you to be the best person you can be. 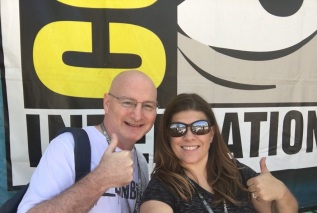 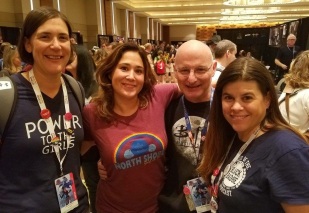 I’ve met many very cool celebrities over the years because of my involvement in Dragon Con for the past 10+ years, but I’ve never been more excited to meet a celebrity than when I got to meet Emily in person for the first time at ClexaCon 2017.  In the photos, I look like a little kid who just met Santa for the first time.

Because we need more positivity in life

My love for “The Wall” scene from the season 1 finale is infamous. There have been several powerful Earp sister scenes since then, but getting to visit the actual filming location where they shot that had me crying over a brick wall on a public street. Nuff said.

Between doing the podcasts and interacting with the fandom on Twitter and Facebook every day, Earping is now a major part of who I am.

Deciding to host a live fan hangout after the episodes air on Friday nights and getting to chat with members of the cast and fans from all around the world into the wee hours of the morning.

Former mayor of Sunnydale Richard Wilkins is the new mayor of Purgatory. How does our Canadian Scooby gang defeat him?

Knowing how much of an egomaniac he is, we could get Wynonna to confront him in a public place. She can totally distract him by ticking him off, which would give Waverly and Doc a chance to implement some type of magic spell to contain him in some type of hell dimension.  Buffy crossover FTW!

Here’s where you can find Kevin:

Many thanks to Kevin for agreeing to be EarperViewed! See you back here Thursday for this week’s last!