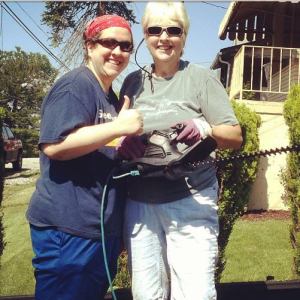 I had grand plans of making a Mother’s Day post this weekend, but I was at a birthday party for Oh Honestly Erin’s son, Chooch/Riley, then it was off to Ohio (for dinner) and WV (back home) for celebrations with my mother. So, you know, a busy weekend. And I feel like spending time with my mom is an excellent reason not to have time to write about her.

The picture above is from last summer. Mom and I are in the back of her pickup truck, trimming the shrubs beside my driveway. After some trial and error, we discovered 5 years ago that this was the best way to get the tops. I always joke and say that my mom says I’m not allowed to use the electric hedge clippers without adult supervision, but, really, it’s a smart rule. I’m often awkward and someone should be there in case I slice off a thumb trying to make a thumb’s-up.

My father passed away almost 11 years ago, so for quite some time, my mother is the only parental influence I’ve had. Even when he was alive, he wasn’t much of a talker, and we weren’t a lot alike, so I was always grateful to have her. Even though she didn’t maybe always understand what I was thinking or what I said or who I chose to be with, she was always supportive. I mean, is, too. Not just was.

I have said before that I am a hardy country woman, like my mother, but that isn’t exactly true. She’s much hardier. During a health issue a few years ago, one of her main concerns was whether or not she could mow the lawn. Now, when I say lawn, I don’t mean the tiny space that I struggle with mowing. I’m talking hours of pushing a non-self-propelled mower over a large space of land that includes some hills. When I have an issue with the house, she’s my first call. “What should I do?” is probably something she’s tired of hearing from her 37-year-old daughter, but I can safely say she won’t be hearing “Don’t worry. I know what to do” anytime soon. For instance, she’s been asked questions about recipes, lawn care, windows, and gardening in reference to one party Chris and I are planning. And that doesn’t include the years of help with this 100-year-old house and its yard, all of my apartments, my dating woes, and “can I eat this if it’s expired?” 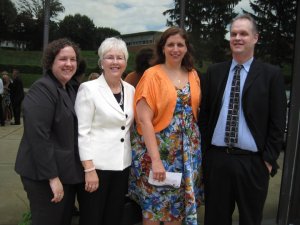 My brother insists that I tell one particular story about her during her eulogy that he somehow thinks I’ll be able to deliver without being a snotty mess. (Yes, we talk about things like eulogies and funerals for all of us. We’re not the only ones, right? Mine will involve the theme song to “The Greatest American Hero,” of course.) Shortly after my father died, I ran into some friends of hers at Perkins. They asked how she was doing, in that concerned, affectionate voice that people use. “Well, you know Mom. She’s a tough old bitch.” Going out on a limb, I’m going to say think I may have surprised them.

I was raised Roman Catholic in a small town in West Virginia. I could actually go on about all of that and my being gay, but I’ll write about that another time (always leave them wanting more!), save for this one thing. In college, I came out to my mother through tears at the kitchen table on a visit home. I don’t remember exactly what she said, but it was along the lines of “Well, okay.” No big deal. She wasn’t worried, either about my well-being or my soul. She knew that this was just something about who I was, like having big feet, and it was no reflection on the kind of person I was. When I expressed concern over my dad disapproving, she assured me that he would be fine…and then assured me that if he wasn’t, she’d have a talk with him, and then he’d be fine. (By the way, he was fine. Worried I’d run my mouth and get my ass kicked, but fine that I was gay.)

I could share a lot of funny stories, but a lot of them would get me in trouble. There was that Christmas that I had to explain what a tossed salad was. There are our code names on vacation when we used the walkie-talkies (she was Storm; my sister-in-law was Wolverine). There’s the fact that she laughs and shakes her head every time I refer to one of our family members as Foghorn Leghorn. (It’s accurate.) There’s that time she told the church-directory photographer, “Wait. We need one more picture. My daughter-in-law wants to put on a horse’s head and have some pictures taken.”

As you can see, my mom is pretty awesome. I think the best part is that she always forgives me for being a mean, always loves and supports my brother and me, can always make me laugh, and laughs at most of my stupid jokes. She’s my sounding board, my partner in crime, my advice column, my shopping partner, and one of my best friends. (If you know me, you know I do not throw that phrase around lightly.)  I feel very lucky to have been blessed with her as my mother, and I hope she feels the same.

I love that tough old bitch.