At FanExpo last year, one of the stories my newfound friends told was how Michelle, the youngest one of our group, kind of…froze when meeting one of the stars of her favorite web series. Like, she couldn’t talk at all. I mean, who could blame her? Natasha Negovanlis is beautiful, intelligent, and supremely talented.

At NYCC, despite being on all of her radars, Michelle also walked right past her when she was chatting with some friends and completely didn’t notice. At all. A chance at redemption, blown.

When Natasha was announced for ClexaCon, Michelle was…excited and a bit nervous. She assured us (us is comprised of five ladies — me, Michelle, Heidi, Angie, & Belinda) that she would be fine because she had no intention of meeting her. Heidi and I, who were attending the con, had different plans. With the full support of our entire group (and my wife), we purchased a group photo with Natasha and Elise and refused to tell Michelle what we had planned. This was for two reasons. A, we didn’t want her to be nervous. B…we had no idea what it would be.

Until the day before the photo op.

Between the two of us, Heidi and I came up with a brilliant plan. We would have Natasha draped over Michelle, Elise off to the side looking angry, and Heidi, Chris, and I in the middle amused with ourselves. Not too bad, right? Unfortunately, Heidi and I couldn’t resist torturing Michelle a little bit and began acting over-secretive, including Heidi making a sign that said “You’re welcome,” a nod to Michelle and the fact that we managed to give her this opportunity again.

I finally took pity on Michelle in line for the photo and, while Heidi was off doing something else, explained our concept. I think she was okay with it? Honestly, her glare and her “this is great” face sometimes look the same.

Have you ever done a photo op like this? Let me tell you, it’s nuts. I had only done one prior to this — the day before, I was an Heidi’s second O in an O-H-I-O picture with Shoot. You have about 6 seconds to explain your idea and line up, they take the picture, and you’re done. That’s it. So…things didn’t go as we had planned.

And they also worked out better than we ever could have intended.

We tried to explain our concept, and that’s when things started to fall apart. But the good thing was that in trying to explain what we wanted everyone to do, Natasha draped herself over Michelle for a good 60 seconds. Because there were so many of us, the photographer asked us to move closer, and Elise took it upon herself to jump down and pose on the floor in front of the rest of us. The photographer snapped the picture, and this moment — our friend’s redemption — was captured forever. 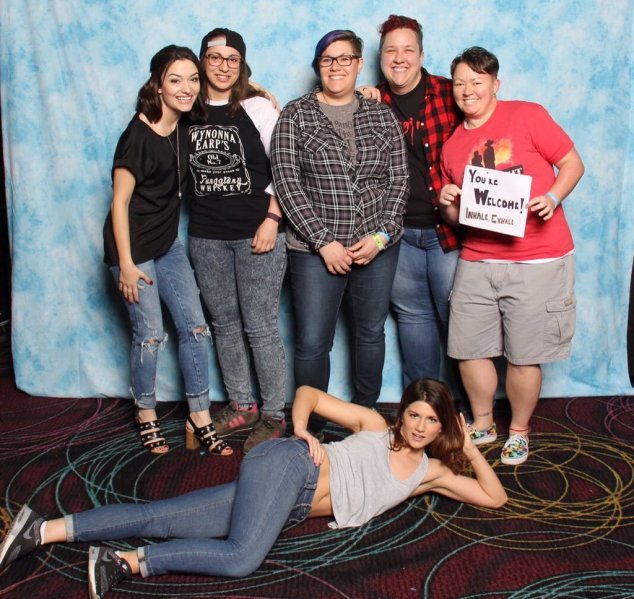 At least you can see my face in this one.

Confident she had faced her fears, she was able to breathe easier the rest of the day. We did a WayHaught/Fandras picture (that is a whole nother blog post of its own, kids), and, later, that night, went to dinner with a group of friends, got ice cream, stopped by the fountain show at the Bellagio, and then walked back to our hotel and said goodbye until the next con. The end.

In the spirit of Evelyn Andrews, there’s a surprise twist ending in there. After we watched one last fountain show (and one of us took a picture for some tourists, I think), and were headed back, walking side-by-side in groups of two, we passed a familiar-looking couple. I immediately stopped listening to Heidi (sorry, H!) and snapped my head around, then snapped it back to see Catherine staring back at me. Yep, Natasha and Elise had just walked by us, unnoticed by everyone but Catherine, Chris (who tweeted at them about it), and me.

Sorry, Michelle. We got you your redemption arc, but at the end, you still missed the girl.

One thought on “A Redemption Arc at ClexaCon”