Heidi, Michelle, and I all converged at the airport this morning. We proceeded to make our way to the Airbnb that I had rented MONTHS AGO. Pay attention. This is important.

We took an Uber to the condo and, following the instructions given to us by our host, request the key from the front desk. The woman immediately asked if I was there because it was an Airbnb, and I said yes, because I am not big on lying. She got a little bit shady, said she had to check with her manager about something with his condo, and left. I had a sinking feeling in my stomach, but we all just hung out in the lobby. She came back and told us we needed to talk to the manager, and we made our way upstairs…like we were going to the principal’s office.

There, the very nice condo manager informed us that the rental we had booked through Airbnb (with many positive reviews, mind you) was booked despite the building’s rules against exactly that, and we could not stay there.

Mildly panicked, we all looked at each other. Heidi and Michelle immediately began looking for a hotel to rent (we were a little gun-shy on Airbnb at this point in time), and I texted Sarah, my best friend from college, and said, “I am sorry to bother you. I am in an emergency situation.” I called her and explained what had happened, and she said, “I’ll have a place for you within ten minutes.”

True to her word, within a few minutes, she called with a hotel she had available for us. I messaged our “host” and told him what was happening and demanded a refund, though at this point I had no idea if it would happen or not.

I’ll be honest with you. I am not great at handling stress, but much to my surprise, I only teared up a little. I didn’t full-on sob or break down…though it’s probably going to happen soon. 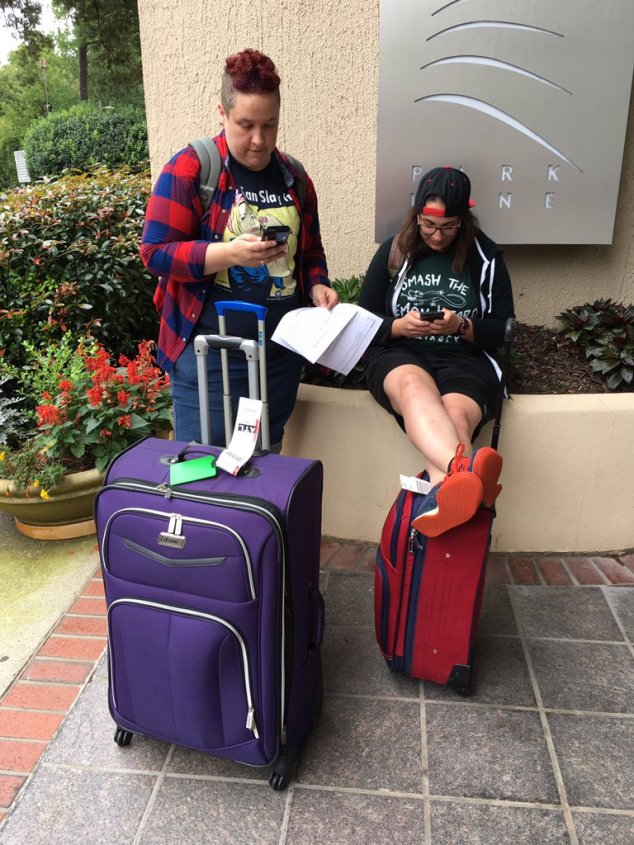 We got another Uber and made our way to our current hotel, which looked like a dump from the inside. But then we walked in and realized it was nicer than most of the hotels any of us had ever stayed in. And, much to our great joy, there were cookies in the hallway. Like, complimentary cookies. Not some pack of oreos that some random kid had left in the hallway. Although at this point, since none of us had eaten since breakfast, we probably would have scarfed those down.

In the middle of all of the drama, I tweeted about how apparently I booked an unlicensed Airbnb that wouldn’t let us in. I have to say, the outpouring of help from the Earper community to all of us was overwhelming. We had offers of places to stay, suggestions on hotels to try, and a really great offer from DocStache to move VisitPurgatory to the shower so one of us could take her bed. It was a really, really shitty day, but…this was definitely a high point. We are in a really great fandom, guys.

The great thing about our new hotel home is that it is across the street from the MARTA station, so we did some math, bought a pass, and headed downtown.

These stairs are so steep, guys.

On the train, Heidi and I noticed that Michelle had fallen asleep. I joked with her that the way to find out if she was faking or not was to whisper “Amy Acker” and see if I got a reaction. Apparently, as soon as I said it, Michelle woke up, despite swearing she “hadn’t heard” us.

We party so hard sometimes the kids fall asleep on the public transportation.

We got lost about 17 times, including once in the Marriott. We grabbed some food and then went to find our people, who were partying at a bar in the Sheraton. As soon as we walked in, a shout erupted from the table, led by the always-energetic Sally.

Then the entire restaurant started shouting at us, which was also great.

We had some drinks and told this story quite a few times, so apologies if it was a repeat.

But, like I said, it was quite a day.

Tomorrow should only get better, right?

2 thoughts on “Thursday at #DragonCon”