Hello, friends, and welcome to our mid-week EarperView! Today we have Sam, AKA Mermaid Dentist, AKA a Christmas name so exciting that when I see that she’s commented on something, I get excited…and then realize it’s “Samta Claus,” not “Santa Claus.” Still a little excited, but it’s not the same, you know?

Sam designed a second logo for our Earpsplain podcast that we absolutely love, and she took on my (asshole) cohosts’ challenge of creating a Sizzling Cathy design, both of which are available in our store, if that’s a thing you want. Ahem. But that’s not why we were here. We’re here to learn more about the super talented, crazy sweet, and all-around Good Sam and to find out the answer to that age-old question, “Does that mean you’re a dentist who only works on mermaids, or are you a mermaid who’s a dentist?”

I first got to know Sam through her designs (a friendship that began with her not knowing Monica and Cathy were the same person), and somehow before I knew it, we became friends. Friendship with Sam is like being wrapped in a bonus blanket. You don’t always know it’s there, but when you need it, it’s surrounding you with warmth.

Somewhere along the way, Sam and I went from fandom friends to actual friends…and then we even met in person. Some people you just meet, and it clicks right away, and that’s how it was with her. I’m so, so fucking lucky to be able to love this mermaid who is a dentist/dentist who specializes in mermaids. And she also made my logo! Is there anything she can’t do?!

Tell us a little bit about your non-Earper alter ego.
Hiii! My name is Sam! I grew up in RI, went to college in NH, and now I’m finishing up my last year of dental school. Doc Holliday is actually my great, great, great grandfather, and I owe all of my dental skills to him. (That part is not true, but I’m trying to convince my wife to change our name to Holliday so I can literally be Doc Holliday.) I would just like to say I’m so excited that you asked me to do this, because you could have picked ANYONE, and I am honored. I love all things chocolate & peanut butter, hiking, and manatees.

How did you find Wynonna Earp and the fandom?
I was scrolling through Instagram last summer and kept seeing things for a “WayHaught” pop up on my feed. Kat and Dom are not, like, super attractive or anything, so I just scrolled on by. As in, I immediately clicked on every image I could find and basically ruined every season one scene for myself, because I spent the next three days researching what WayHaught and Wynonna Earp were. I quickly realized that the entire show seemed amazing and the fan response was like nothing I had ever experienced, so I binged all of the first season in two days. I made my wife buy me the second season on Amazon, because we don’t have Syfy, and got her hooked as well. I was so sad when it was over but had heard through Instagram that the writers and cast used Twitter a lot to interact with fans, so I began to follow them and a few Earpers. I had no idea how Twitter worked, so I awkwardly messaged Kevin on what I’m pretty sure was his personal account, asking if I could join the New England Earper DM, and he was very kind to not laugh at me. Then I got to meet an amazing group of Earpers at the NE Earper meet-up in the fall, and the rest is history, as will be your time, because I am so long-winded. [ Editor’s note — I’m here for it. ]

Is this your first fandom?
Yes! It is indeed. I’ve liked other shows before but I had no idea this world of fandoms really even existed. I had a sense, but really I was completely clueless.

What is your favorite fandom memory?
Getting to meet some of the Earpers at the meet-up/via Twitter, and having friendships grow from it, is definitely my favorite memory. When I told my friends I was going to a bar to meet a group of strangers I’d met online, they thought I’d gone off the deep end. (They have since binged the show as well, and are huge Jeremy, Dolls, and Doc fans.) I, like Nicole Hot/Haught, am unfortunately also gluten-free, and Earpers went out of their ways to make and buy me gluten-free baked goods for the meet-up. Everyone was so kind and generous — my cheeks literally hurt when I left. I’ve also received some of the best mail from Earpers, JUST BECAUSE! Just because they’re so lovely.

What is your favorite con memory?
It was the end of a very long day of con-ing. I was exhausted, but I decided to unwind with a quick nightcap at the hotel bar. The bartender pours me a whiskey, neat, like the good Irish-French Canadian girl that I am. It was quiet, and the lights were dim. Suddenly, I feel a presence to my right. I turn my head to see who has joined me — it’s Dominique freaking Provost-Chalkley. She gives me her signature moon-eye smile and I catch myself right before I fall off of my barstool. “Hi, I’m Dom”, she says. “Hi, I’m Dom”, I repeat back. “I mean SAM! I’m Sam”, I exclaim, lowering my head into my hands to hide my face. Dom laughs in a British accent before asking, “Can I buy you a drink?”
Suddenly, from my left, I hear, “Not so fast, shorty. Bartender, put her drink on my tab.” It’s Katherine mother-effing Barrell. ::Internal gay panic:: Kat and Dom begin to argue over who gets to buy me my drink, as I frantically search the bar to see if any other Earpers are witnessing this exchange. Finally, I see someone moving towards us. “Thank GOD someone will see this and believe me”, I think. “Ladies, ladies, ladies”, the mysterious figure commands as she approaches. It is Emily. Fucking. Andras. WayHaught freeze mid-argument, as Andras bellows, “This bar is the bus, and I am the goddamn bus driver. Ward’s drink is on me.”

Okay so I actually haven’t been to a con because I am a fangirl baby, and dental school is A LotTM, AND that story is CLEARLY not real, but I imagine cons go something like that? I’m hoping to get to the EH Con this summer and would love to meet as many people as I can!!

What is your favorite Wynonna Earp/Earper activity?
Watching the show over, and over, and over again with new people, and being completely shocked every single time that I catch new information I missed the first seven times around. Also, tweeting with Earpers! (Go Pats!) [ Editor’s note — this EarperView is canceled. How can you like a team whose quarterback has never eaten a strawberry? ]

What has Wynonna Earp come to mean to you?
I know everyone probably says this, but I really am in awe of how good Earpers are. Like, at their cores. Across the board, they are the kindest, most generous, caring individuals and group of humans I’ve encountered. 2016 was not a great year and then 2017 said, “Hold my beer.” Wynonna Earp and everything that surrounds it has become a constant beacon of light, and hope, and ecouragement at the end of the  long days.

Are there any pictures you’d like to share of your Wynonna Earp experience?
I don’t have many because I haven’t been to many events, but here’s a lovely photo of the group from the NE Earper meet-up! Look at all those cute faces! 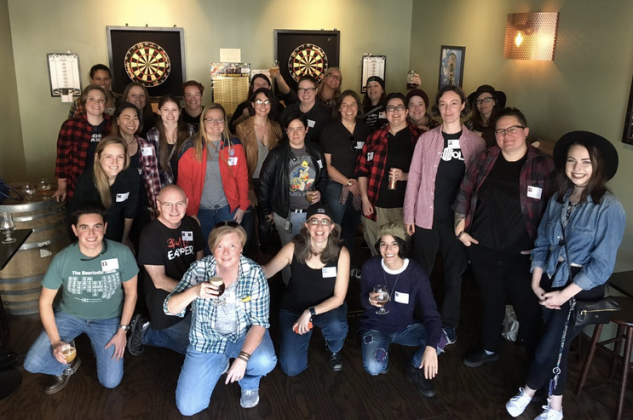 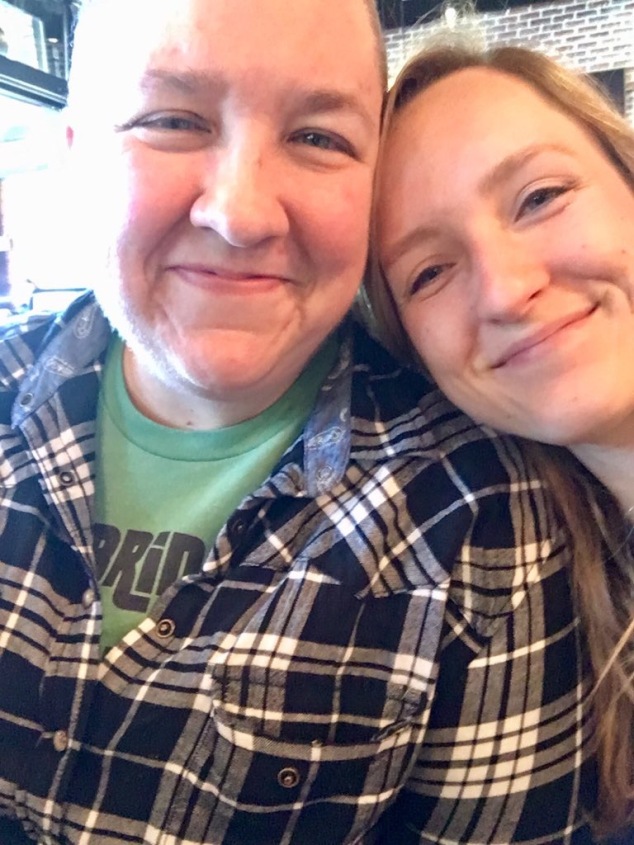 Widow Beth or Widow Mercedes?
Ohhh this is way too hard to answer! Dani Fucking Kind already knows how much I love her (I hope!), so I’m going to say Widow Beth, because she is SO underrated Also, Meghan Heffern’s IG stories make me laugh all day.

Describe why Fandras is a thing in 7 words or less.
Emily listens, cares, and protects our hearts.

What is your favorite Earp sisters moment?
There are so many good moments, it’s almost impossible to choose. One I think really sticks with me is in Season two, episode one, when they’re in the BBD headquarters and Lucado pulls her gun and points it in Waverly’s direction. Wynonna immediately jumps in front of her to protect her. It’s such a quick moment but it perfectly demonstrates how Wynonna would literally take a bullet to protect Waverly. Their love for one another is so beautiful. I have to end this question here because I’m going to start crying.

How have you Earped your life?
One of my best friends is a huge Buffy fan, so she was an easy sell when I pitched Earp to her. My other friend, I didn’t really give a choice, I trapped her in my house with thai food and she ended up watching the first five episodes. This past weekend they came over for brunch, and I asked what they wanted to watch, thinking a Christmas movie would be recommended. They both simultaneously said “Wynonna Earp!” I literally squealed. It was one of my proudest moments.

What’s the Earpiest thing you’ve ever done?
Probably getting my friend hooked on Wynonna Earp, to the point where she is adopting a puppy and is going to name it Doc. #earpwashed

Nicole, Waverly, and Wynonna, after defeating the 77, go on vacation and accidentally end up in Themyscira. Describe what happens.

Wynonna, stumbling off of the raft: HAUGHT!! Where in the sweet hell are we?
Nicole: Well, according to my map, we’re somewhere between Mordor, annnnd… King’s Landing? Says here, ‘Themyscira’.
Waverly: Ohhhh, Themyscira?! I’ve heard of this place! I once wrote a forty-page paper on it for extra credit! Themyscira is the land where ‘No man may set foot, under penalty of death!’ It’s Aphrodite’s Law! Good thing we left the boys at home for this one, ha!
Wynonna: I know you’re a lesbian, not a unicorn, Haught, but really? An island full of women?
Nicole: For the record, I was NOT the one who fell asleep during their shift, WYNONNA!
Waverly: Ummm guys… now’s really not a good time to argue.
:::the sound of horses swiftly approaching cuts through the air:::

And on that day, all of Themyscira fell on bended knee to Wynonna Earp, who somehow convinced the Immortal Amazons that she was THE Aphrodite.

Guys, Sam knocked that WW question out of the park, didn’t she? DAAAMN.

Here’s where you can find Sam:

Thank you so much, Sam, and to everyone for reading! Check back here tomorrow for Thursday’s installment.