Hello, friends, and welcome to this week’s EarperView! Today’s is extra-special exciting for me, and I’ll tell you why. A couple of months ago, some top-shelf Earpers did a fundraiser for RAICES, and there were prize drawings for people who donated. I jokingly offered an EarperView, thinking no one would actually want one, and Jill and Sarah took me up on the offer. Much to my surprise, it was not the last one chosen!

I started these as a way to get to know people in the fandom and began by strong-arming my friends into agreeing to fill out my stupid survey questions, and it just is such a wonderful feeling to know that people enjoy reading them.

Our lucky winner was @HaughtDoc, AKA one of the Merediths. I had the pleasure of meeting her at EH Con, and she was just a lovely human being, and all of her cosplays were amazing. I wish I had that level of creativity in my brain.

Anyway, Meredith, thank you so much for choosing to be EarperViewed!

I am born and raised in Virginia, leaving briefly for college. I went to the Naval Academy and majored in Oceanography. I was in the Navy for 5 years before leaving due to bad knees. If you ever see me walking around a con you will see my bulky knee brace but there are pictures out there where I am totally Maverick in my officer’s uniform. I then went to law school and now I am a prosecutor in a small county at the Southern edge of Virginia. I live with my fiancee, two dogs, and my cat. In another life, I played roller derby under the name Hofosho and was a NCAA D1 rower in college. I am an avid soccer fan (Orlando Pride) and am the biggest Boston Bruins fan on the planet.

I followed Dorothy Snarker on another Twitter account. I saw she tweeted a lot about this show Wynonna Earp and its positive LGBT representation. Then I saw that the first season was on Netflix and convinced my fiancee that we should check it out. I think we binged it in two nights. Luckily, it was right at the beginning of the second season, so we jumped right in.

No. Actually I was pretty active in the Rizzoli and Isles fandom. I made a bunch of friends on Twitter through that fandom and they are my original Twitter family. They are now getting into Wynonna Earp, which makes me super excited, except for they don’t follow my Wynonna Earp Twitter so I have to switch back and forth. I actually met my fiancee when she commented on a Rizzoli and Isles fanfic I wrote. I proposed to her at the spot that inspired that fanfic. [ Editor’s note — why is it raining on my face? ]

My favorite fandom memory is probably when we went to Boston Pride this year. It was just a whole weekend of amazing times with some great Earpers. Talking to people on Twitter is great but then actually getting to meet them and laughing, dancing, stealing light bulbs, accosting people near the bathroom to spread the gospel of Earp, and just having an amazing time is something that can’t even compare.

There is a tie for my favorite con memory. The first one was at DragonCon. I was lucky enough that I got the opportunity to win a ticket to Emily’s writing workshop. We were all waiting outside when they called all the winners to come inside to meet Emily. That meant so much to me. Then while we were standing there, Melanie Scrofano walked in and we got to chat with her as well. I then hit the trifecta because I got the chance to brainstorm writing ideas with Sensitive Pigeon, who is brilliant.

The other great con memory was at Clexacon during Cocktails for Change. I have bad social anxiety so I tend to not engage with people until I am comfortable. But the other Meredith (@beerandcrosswords) wasn’t allowing that. We met up beforehand and walked around the whole time going up to different actresses saying “Hi, we’re Meredith.” I don’t think I will ever forget the confused look on Dominique Provost-Chalkley’s face. That’s also where I earned the title of Emily’s Favourite Meredith. Her words. Not mine.

I don’t know if I can pick just one. Meet-ups, talking on Twitter, cosplay, conventions, my wood burning, and writing/reading fanfiction are all activities that have brought me so much happiness.

Love, friendship, and acceptance. My favorite show moment that sums up the whole fandom is the season 2 finale when Jeremy tells Nicole he stayed because he doesn’t fit in, but no one asked him to. He’s allowed to be him. Well, that’s me. I’ve never really fit in. But this fandom doesn’t ask me to. I can be my weird self and it’s ok.

I usually hate taking pictures but here are a few I don’t hate. 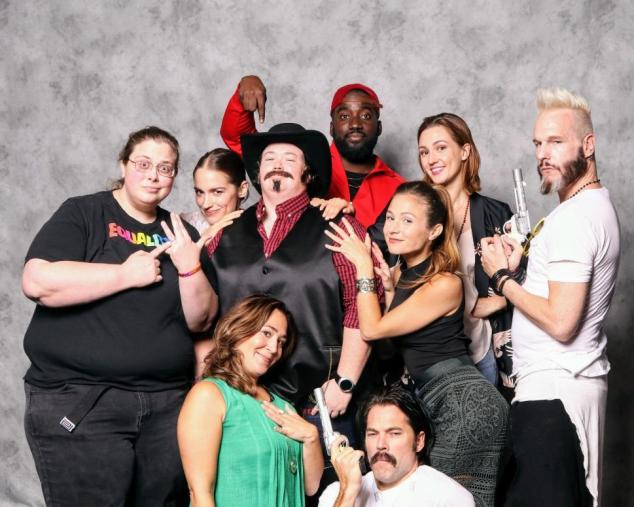 These are from the Boston Pride Earper meetup, me being a total goober with Emily, Cast photo at DragonCon complete with me in cosplay as Doc and my fiancee (Tim and Michael totally stole the guns out of my holsters for this picture), and me and Meredith with photo evidence that I am the favourite Meredith.

Definitely Yukon Gold. I am a pale Irish girl who loves her potatoes.

I wanted to say something witty about these going to 11 but that just doesn’t seem to sum up my level of Fandras. Let’s just say my blood type is Fandras positive.

Describe why Fandras is a thing is 7 words or less.

Because it is. Don’t question it.

I would have to say my favorite Earp sisters moment is the entire first episode. The relationship between Wynonna and Waverly often reminds me of me and my older sister. She’s definitely the Wynonna. She never ran with the Bandidos, but she has been less than perfect in her past. I’m the nerdy one that got over educated and most people in our hometown like me. But I still love and look up to my older sister. So I love the interaction between the Earp sisters when Wynonna returns. Doesn’t matter where Wynonna was or what she did, Waverly is happy that she’s back.

The Earpiest thing I’ve done is probably bought a last-minute plane ticket to Boston so I could hang out with a bunch of Earpers. Either that or spend about a month building a suit of armor out of foam so that I could cosplay with a bunch of other Earpers as the 12 Days of Haughtmas at Clexacon.

If time and material weren’t an issue, what is the ideal Wynonna Earp woodburning project you would like to do and why?

Have you ever seen Bill and Ted’s Bogus Journey? (If not you aren’t really missing anything.) At the end they realize that they are still horrible musicians and can’t play their instruments. So they use the time machine to do a 6 month intensive training (which does not match with the rules of the first movie but I digress) and they come back able to play ‘90’s KISS. Well if time and money weren’t an issue I would do that first. My family is very science and math oriented so we never were really encouraged in art. I really wish I could take the time to better learn to draw. After my 6 month Bill and Ted course, though I would love to burn the entire cast in wood. I have started trying some and have done a decent Doc, but would love to do the rest at a level that I actually felt comfortable showing people. I love wood burning and I love Wynonna Earp, so I would love to do something really detailed to show my love and appreciation. I’d also like to do something for an Earper who wanted one.

Thank you so much for playing along, Meredith! Enjoy your day, everyone!