Hello, friends, and welcome to the penultimate week of EarperViews! I can’t believe the season is almost over. We have a special treat today, because we get to learn more about the human behind one of my favorite pin companies, Demons and Donuts.

I own what is quickly approaching an embarrassing amount of merch from this store, and while I love the pins, one of the best parts about the whole experience is interacting with Valerie. She’s always been so lovely to talk to, and so accommodating when, say, you order the wrong pin for your wife. Hypothetically.

I think she really has a finger on the pulse of what the Earpers like, and not just Wynonna Earp content, either. It’s just a nice feeling when people…get you, you know?

My name is Valerie, I live near NYC in New Jersey with my girlfriend and my cat, Buster R. M. Kitten. My non-Earper alter ego works at the United States Dept. of the Interior National Park Service as a Curatorial Park Ranger at a historic site/museum. I take care of objects and archives contemporaneous to Wyatt Earp. When the Earp Museum opens up, I volunteer as tribute to be the Curator. The exhibits would be amazing. On the weekends, I sell vintage toys and collectibles.

During the offseason between Season 1 and 2 my girlfriend saw it on Netflix and suggested we try it. She had heard about WayHaught and knew the comparisons it drew to Buffy, which we both love. She may or may not regret that choice now because I give her non-stop, unsolicited updates of everything Wynonna Earp.

My first fandom was Buffy, which I got into in middle school. I’m not sure exactly what it was that appealed to my 7th-grade self, but it was more than likely the fact that it had a strong female lead during a time when that was pretty scarce on television. Then came Willow and Tara and I thought…hmm. I had loved the show before, but to see someone like myself represented on screen was incredibly important for a reserved 14-year-old marinated in the culture of the Southern United States. They had normal lives and everyone around them still loved and supported them, so it gave me hope and lifted a small amount of the heavy weight I felt on me. I felt I could talk to no one, and didn’t, but I knew that every Tuesday there was an hour of relief. Back then there was no Twitter, of course, so it was more of an internalized fandom. The show still means a great deal to me, and I have a piece of the wardrobe — the hoodie Buffy got shot in (from “Seeing Red”) and a replica of Faith’s knife hanging on a wall in my apartment.

My favorite fandom memory is probably when I mailed the cast pins of their faces expecting to never hear or see anything about it, and then saw via instagram that they had put them on their director’s chairs while they were filming season 3. It was such a cool feeling that this little idea I dreamed up on my couch thinking about my favorite show somehow made it to the set in Calgary and was seen by the cast. Tim Rozon, the known Earpiest Earper, also sent me a message after receiving his Doc pin, which was amazing of him to do.

I, unfortunately, have not had the pleasure of attending an Earper convention as of yet, or meeting another Earper. I really hope to someday. As for non-Earp conventions, at NYCC I met Natalie Dormer and she told me to watch the Amy Winehouse documentary, so I did. When Queen Margaery Tyrell tells you to do something, you do it.

Not much beats watching new episodes on Fridays while the cast and writers live tweet along with it. I’ve never seen a group of people so dedicated to their own show and its fans. I imagine the only thing that could top any of that would be meeting the cast or Emily Andras. I’m also a member of the Shelley Scarrow fan club, so I’d love to meet her and any of the writers as well.

It means so many things. Earpers, community, found family, and being unapologetically yourself. You can have flaws and be messy and still be a loveable badass. Inclusivity and an unconditional safe space. Also, donuts.

Here is a photo of Melanie and Dominique’s chairs during the filming of Season 3 with some of the pins I sent them. I saved them, of course. One of the coolest moments I’ve had during my time within this fandom yet. 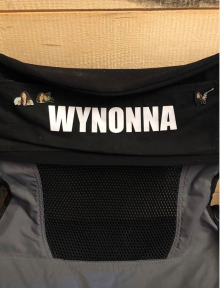 Processed with VSCO with hb2 preset

Yukon Gold, no question. Sweet potatoes also just get so soggy as a fry that I can’t get behind them.

*insert Mean Girls gif* The limit does not exist.

It would have to be when Willa called Waverly “a gay.” [ Editor’s note — I laughed so loudly at this that I scared my cat. ]

No, but really, they’re all so great. I loved during this season when Wynonna said to Waverly, “You’re my favorite person in the whole wide world, baby girl.” I love a Fireside Earp Sisters Chat, and after one of the worst days of Wynonna’s life, she reaffirms to Waverly that she isn’t going anywhere, and she’ll never leave her in any way. That even in death they’ll be buried on the homestead, side by side. As a bonus lighter side note, I also really enjoyed the scene where Mama Earp, while chopping up a wild turkey, tells Wynonna and Waverly to pull up a chair because she is about to tell them about Waverly’s dad. Wynonna sits down so fast she spills tea on herself and Waverly trips to get into her seat. It was a very short moment but I loved that Wynonna is clearly just as invested as Waverly in knowing more.

I certainly use Twitter a lot more than I ever did before. My mom is now a fan of the show and even makes sure to watch it within a certain amount of time for it to count for the ratings. I always know what I’m doing at 9pm on Fridays while the season is on. I also created a website DemonsandDonuts.com to make Earpy things just because I wanted to be a small part of it all. So far I have made mostly enamel pins, but have plans to potentially add other things in the future. Most of the pins I posted are Wynonna Earp related but there are a few from other LGTBQ+ fandoms like Orphan Black, Carmilla, and the video game Life is Strange. So any in between time I have right now is spent on shipping pins out and preparing for the next week’s release.

The Earpiest thing I’ve done so far is probably releasing something new and Earpy on my website every week the show is on. It took a lot of preparation and continues to be challenging, but it’s a lot of fun and I hope that it’s something some Earpers look forward to. [ Editor’s note — we do. ] I also love doing giveaways on Twitter and donating items along with other Earpers to benefit and important organizations such as RAICES and Green Ribbon Club whenever I can.

What would a Killing Eve/Wynonna Earp Crossover look like?

The gang has to track down a killer wreaking havoc all over Purgatory. They’re expecting a revenant. Maybe another Bobo? Turns out, it’s this tiny ass Russian chick, and they don’t have to track her down at all. She awaits them in their office, eating their donuts. Nicole wants to arrest her, Waverly wants to study her, and Wynonna would like her to not comment creepily on her hair so much, because it’s giving off super serial killer vibes, and not in a sexy way.

Many thanks to Valerie for playing along! I was so happy to get to know more about the person behind the pins. As for the rest of you, I’ll see you back here next week. Maybe there will be fun surprises!