It’s been a long day, and yet here I am, sitting on the couch with Graham as company while Chris is asleep. The disadvantages of being on opposite shifts. 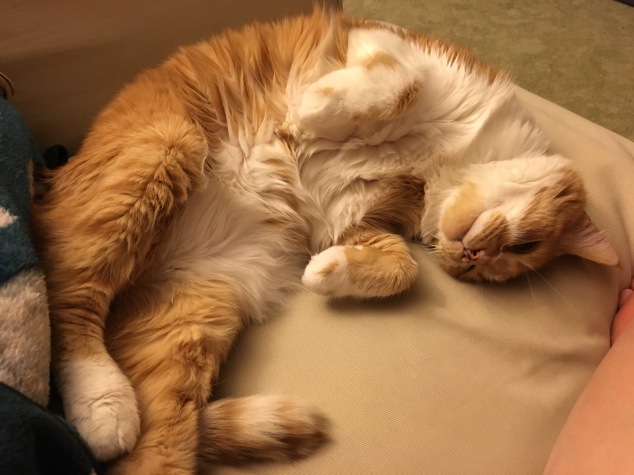 My lunch break today consisted of taking part in a “power hour” where the Wynonna Earp fandom tried to get a hashtag to trend. The overall theme of today was WayHaught Wednesday, and I took part in that throughout the day. Towards the end of “pahr hahr” (yinz know ‘at’s hah we say shit n’at), I started tweeting gifts of characters who were victims of the Bury Your Gays trope, saying the show would never let that happen to our precious WayHaught. Simple. Easy. Difficult to choose.

The first, my beloved Tara, the character death that made me nervous about getting invested in a gay character again. Tara, you got so much more interesting after you broke up with Willow, and then after you were both finally happy, they took it all away. Charlie from Supernatural, because Felicia Day is so amazing and so was that character. I chose Clexa from The 100, because even though I didn’t watch it, a good friend did, and she was traumatized by her death. Dana from The L Word. I quickly skimmed through a list of over 160 lesbian characters who met their untimely death and made my picks.

My time was running short, so I switched to “we know you’ll let WayHaught end up like these couples” mode. Easy. Bo and Lauren from Lost Girl, obviously. Lesbian OTP of the century. And…um…oh, yeah. Graham and Megan from But I’m a Cheerleader. They rode off together in the back of a pickup truck, and so what it wasn’t TV? Next!

Sigh. Damn it. So I tweeted a gif of Ellen and Portia. I realized things were desperate, so I googled. I quickly dismissed most of the ones I found. Bette and Tina? Ugh. I wouldn’t wish their relationship on my ex. Willow and Kennedy? Fuck you, list of 16. No way. Brittany and Santana? Oh, that’s a good one. Let’s quit while we are ahead, shall we?

WayHaught is so important because I had an easier time finding examples of dead lesbian characters than happy ones.

WayHaught is so important because one — ONE — long-term lesbian pairing in recent history got their happy ending. (And I say “long-term” because I feel like I’m in the minority that really liked Callie and Penny together. Sorry, Calzona people. Please don’t wage war on me. Plus, I’m sure we haven’t seen the last of Callie at Seattle Grace, and we all know that her happiness is often temporary.)

The world is a confusing place for a young gay lady. I speak from experience. For every positive (legal marriage!), there’s a negative (senseless shooting in Orlando). For every build-up (I think I like a girl! I’m so happy!), there’s a tear-down (my “friends” started a rumor that I’m gay and my life is basically over). The value of a positive depiction of a queer couple (one confident, one figuring things out) can’t be overstated.

We need a season 2 because we need more WayHaught in our world, for these important reasons and also because DID NICOLE HEAR WAVERLY SAY SHE LOVES HER?!

Also, WayHaught can make 39-year-old women turn into fangirls and enjoy every minute of it.