Hello, friends, and welcome to another new EarperView. This week I’m featuring Nikki, who I have known (read: followed on Twitter) for several months know.

Nikki is always the first example when I think of kindness in the Earper fandom. A few days before ClexaCon, I realized that I had forgotten to order pins in the new Liszewsbian design that we had in our merch shop. I was too late to order them on Etsy, but I knew Nikki was a pin-maker in her spare time, so I messaged her. She agreed to do up some pins real quick for me to pass out, and I practically had to beg her to let me pay her for them, although I’m pretty sure she charged me barely anything. Our first “introduction” was passing each other in the lobby of the Tropicana, quickly exchanging pins and dollars. Later on at the con, she passed by me wearing some of my podcast merch and loudly proclaiming it was her “favorite podcast,” a fact which endeared me to her immediately.

Nikki is just an all-around lovely human who feels that she was put on this Earth to try and fight for what’s right, and I think that’s something we all could aspire to these days.

I like to describe myself as a hobbit trapped in a tall lesbian’s body. I work in a cubicle all day, but most of my time is spent with my awesome dog and cat, hiking, carving, reading, or cooking.

OH, BOY. WELL. It was the article Kat Jetson wrote about the similarities between Buffy and Wynonna Earp (It’s important to note that at this point in time, I didn’t know who wrote the article, or who KJ was) My local comic-book store posted that article on their Facebook page. I read it, went home, and dove head first into the first season on Netflix. Fast-forward to next morning, me with no sleep, purchasing the second season, and sneakily watching it at my desk. I could not get enough.

Is this your first fandom? It is my first fandom. I’ve lurked other fandoms, but the toxicity usually kept me from engaging. I remember when I created a Twitter account specifically for this fandom, it felt like a huge thing to do. Turns out, it was a very significant turning point in my personal life.

Probably when OHMYGOD IS THAT DRUNKHAUGHT FROM TWITTER!? followed me. Or that one night I thought it was a good idea to get wine drunk and play Spice Girls songs on my guitar and post them to a thread that was already 500 replies deep. I may have been in my underwear? Idk, man.

This question is woefully unfair, as there are at least a top 5 list (one of which includes having my picture taken with the There’s Something in the Heir crew). However, one does stand out.

It was one of the only panels I made it to during ClexaCon. I can’t remember the exact name of the panel — Power through Fandom maybe? I feel horrible that I can’t remember the name of it now. At any rate, Kat Jetson was on that panel and started talking about her experience with the Wynonna Earp fandom.  She brought up the aforementioned article that she had written about WE and Buffy. So at this point in time, I obviously know who Kat Jetson is, because like we’re friends. However, I had NO IDEA that she had written that article. So the realization of it, hit me like a ton of bricks. It hit me so hard that maybe I teared up a little in the front row. It’s fine; everything was fine. There I sat, several months after creating a fan Twitter handle, sitting next to my gf who I met through this show, listening to my friend talk about what this show means to her and how she is totally the reason I got into it. I was a little emotional.

Traveling around the globe to hang out with the most important people in my life under the guise of attending cons.

I just…it’s beyond words. So much of the show is about chosen family. And so much of what the show has helped me find is my chosen family. It also gave me the courage to not accept the things in my life that weren’t bringing me happiness. It helped pull me out of the tail end of a deep depression. What my life is now, I owe much of that to this show. 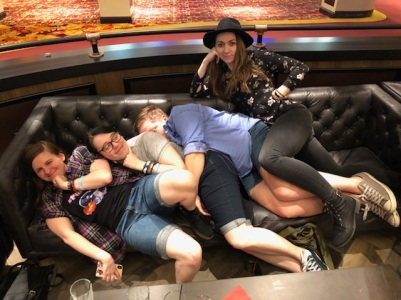 Sweet potato or Yukon Gold potato? While choosing a favorite child is frowned upon, Yukon Gold.

We didn’t even have to ask her.

I’m the only child of parents who didn’t want me….so family stuff, especially sibling stuff is a mystery to me….but it seems like something that probably feels pretty rad to have. When Waverly finds Wynonna after the AU debacle. Wynonna being a little pissed, but also just so….loving. It hit me in the feels, that hug, ugh. I’M NOT CRYING.

How have I NOT Earped my life? So much of my daily revolves around this beautiful, crazy group of people. But probably convincing @bk_edwards to be my neighbor was a pretty big one.

Met a girl from England on Twitter talking about a show, fell in love, and decided to make our own happily ever after. (psssst, it’s @iddstar, go look at her awesome artwork while you’re at it.)

What position would each of the characters in Wynonna Earp play on the Purgatory quiddich team?

I have OPINIONS about this.

Champ: Chaser. Don’t @ me, you have to have at least one asshole scorer that Wynonna may or may not miss Bludgers for.

Jeremy: Seeker; with those moves and smallish frame, he’s our dark horse.

Nicole: Keeper….because something something, she’s so protective.

Here’s where you can find Nikki:

Thank you so much for reading along, friends, and many thanks to Nikki for playing along. I owe you a beer or an awkward, stiff handshake, maybe.

I’ll see you all next time.