Our penultimate EarperView is with Danielle, the Media Director for Earp Expo. I will also add on a person note, Danielle is fucking hilarious and smart on the Twitter, so if you’re not following her, you should.

Idk if I have much of a non-Earper alter ego anymore. I kid, kind of. I live in southern Indiana with my fiancée, Casey. I work for the Louisville Health Department as a Graphic Designer. I spend my free time with my fiancée (playing video games or trying new food places around the city of Louisville). My free time also goes to planning Earp Expo. Next year Casey and I will (hopefully) be purchasing our first house then planning our wedding.

I stumbled on Wynonna Earp after bingeing Carmilla. There was a compilation of WayHaught scenes from season 1 that was suggested to me. I watched it, then immediately rewatched it a minimum of five more times. Internally I thought, “I have to keep watching this WayHaught storyline, so I better watch the whole show.”

I believe I found the fandom through watching reaction videos. The first reaction video I ever saw was Marcie’s reactions to Wynonna. I think I said hey to her once on Twitter, before she knew who I was. This led me to interacting with more Earpers and the cast.

Yes, especially the first fandom I’ve been this involved in. The first “TV show” I got into was General Hospital, I would make “fan videos” of Nikolas Cassadine and Emily Quartermaine.  But this is the first one I’ve been fully involved in.

Definitely winning the PCAs. It’s a huge deal for our little shit show, and it’s even sweeter knowing the award was based off fan votes. Genre television doesn’t get nearly enough recognition and if we can come together and vote for Wynonna Earp to get genre TV on the radar then our mission has just begun. The joy on Kat, Mel, Tim, and Emily’s faces on the red carpet was the real award and better than a million golden shake weights, although a million PCAs would be nice.

The first time meeting Emily. Earpers ‘crashed’ a FanGirls shirt meet up at DragonCon. It was pretty much the first time I had met Earpers and she was the first person from the show I had ever met. The moment I walked into the bar, Emily’s eyes locked on to mine. Well, it was either my eyes or my Fandras shirt that caught her attention; to this day I still don’t know. She was so nice as she introduced herself to me (like she needed to, pfft). She asked me how my con was going so far and we chatted for half a second and it was inevitable, we’re best friends now. The say never meet your heroes, they’ll only disappoint you. Well, I say, “FIND HEROINES LIKE EMILY ANDRAS!!”

Cons will ALWAYS be my favorite Earp activity. It’s comforting knowing you’re in this little bubble of inclusivity, kindness, and acceptance. Meeting new Earpers at conventions are wonderful because sometimes those turn into friendships. Also, it’s the only times through out the year I can see and hang out with my squad.

Cut in half, drizzled lightly with olive oil, seasoned with a little sea salt, pepper, garlic, and rosemary. Baked in the oven. Mmmm. Maybe top with a little sour cream.

If you multiply Idris Elba’s age and Blake Shelton’s age then divide by Total Spice Girls No.1 hits, then subtract the number of PCAs Wynonna Earp has won and add the number of dick jokes in season 3…that’s how much I Fandras.

Because they’re not mutually exclusive.

There are a lot of emotional Earp sisters moments, and if I take the time to think through them all, I’ll be here hours later crying into a pint of ice cream. So I’m going to say the scene in 311 where Wynonna is on the back of the truck and shoves Waverly’s head back in the tool box and shuts the lid while Waverly yells ‘Mother F*cker”. It’s an accurate portrayal of how sisters act and is on brand for the show’s comedic tone.

I think planning an Earp convention is Earping your life pretty hard. There’s a lot that goes into planning a con, so most of my free time is spent on that. My work office is completely Earped out, so I talk about Earp with coworkers any chance I get – I’ve even converted a few Earpers. And I have a TeePublic shop with Earp tees that you can find here.

I made Dom’s iconic water bottle into a tapestry. I wanted to cosplay her bottle at Earpapalooza, but it didn’t work out quite as planned so I wore the tapestry as a cape instead. Dom’s reaction to it was priceless. She was floored by the fact that someone took the time to recreate all the stickers on her bottle and put it on a tapestry. Here are some photos. 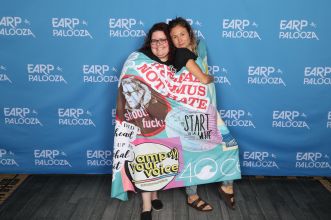 The Waverider lands in Purgatory. What sort of anomaly did they find, and what happens?

The Waverider travels to Purgatory to stop the Abdominal SnowWoman from demolishing the town completely. After Wynonna, Peacemaker tests the Legends (Hey, she has history with people showing up and not being who they say they are), and they pass with flying colors. Their teams work together to fight the anomaly and are almost unsuccessful until Rory brings out his flame thrower and turns the creature into a puddle of water while Wynonna yells, “Take that, you Abdominal Snow Bitch.”

They all find themselves at Shorty’s because, if there is anything these teams know how to do, it’s drink. Rory and Haught are playing drunken darts, causing a ruckus. Ray is still shocked by the fact that THE Doc Holliday, the greatest gunslinger in history, is alive and sitting in front of him. Waverly and Ava share murder board stories and gab about their amazing girlfriends. Gary and Jeremy, standing with their shirts up, ‘show off’ their nipples (one inverted, one missing) to each other. Meanwhile, Sara and Wynonna stand on the steps of Shorty’s, look on, proud of their team and the hard work they did.

As the Legends board the Waverider to leave, Rory side-eyes Haught, shaking his head. “What was all that about?” Waverly asks putting her arms around her girlfriend.

Nicole gives one last wave to the team before turning in her girlfriend’s arms, placing a small kiss to Waverly’s lips. “Oh, he’s just mad I beat him in darts.” Haught says pulling Waverly back inside Shorty’s, making her way behind the bar. “And we were playing for this,” she exclaimed as she raised a weapon from behind the bar.

Waverly’s eyes grew three sizes as she recognized the device in her girlfriends’ hands. She jumped up and down yelling, “OH. MY. GOD. A FLAME THROWER!”

HOLY SHIT, THAT WAS AWESOME.

Also, Danielle wanted to include something about Bobo/Beebo, but ran out of time to work it into the story. I loved that so much that I wanted to throw that in.

Anyway, I’ll see you back here tomorrow for the last in this week’s Very Special Earp Expo EarperViews.